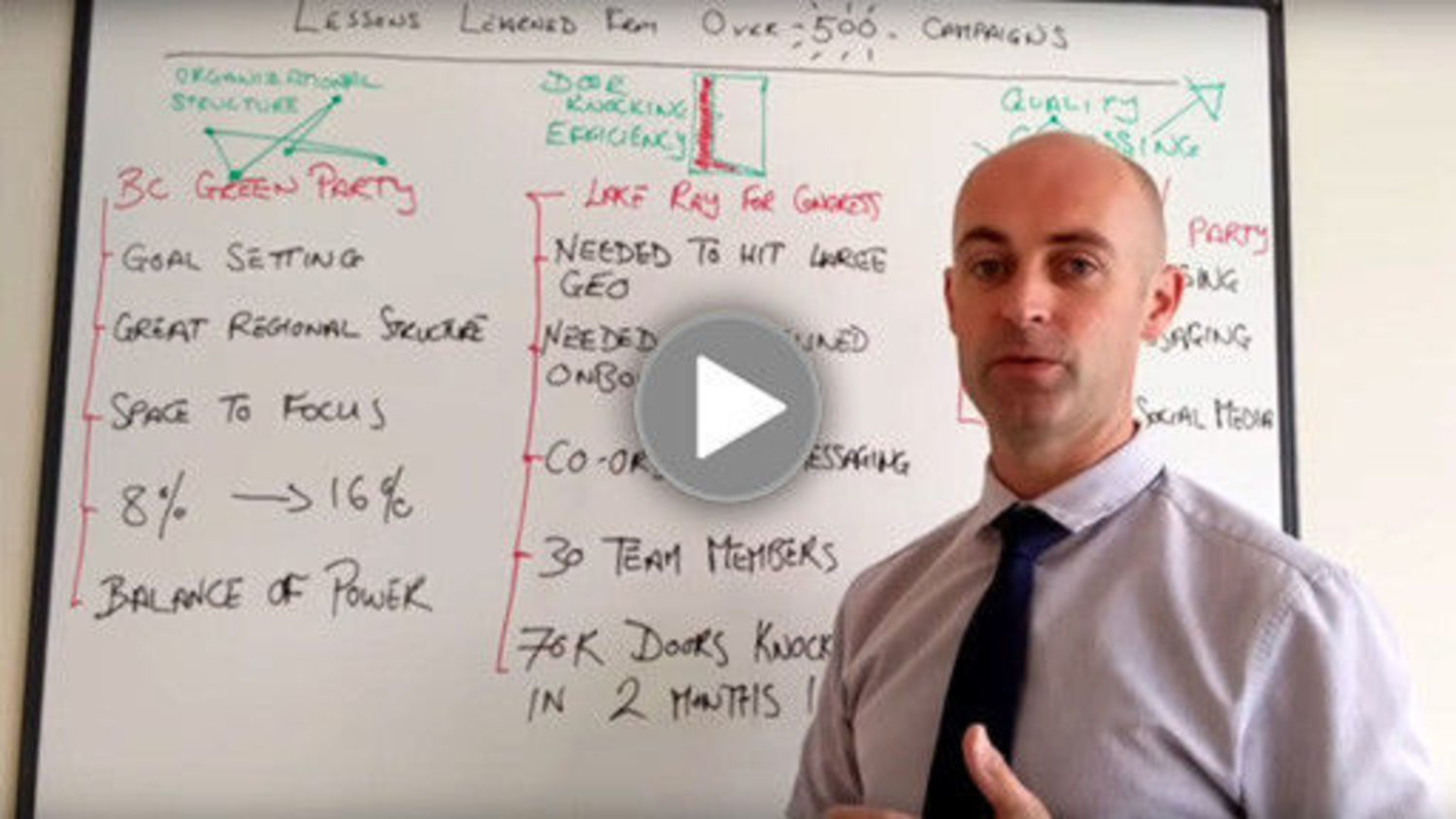 From Vancouver to Valetta, campaigns are being run in new and innovative ways. This is where we composite knowledge built up around technology, political campaign strategy, and organizational structure. If you think something is missing, let us know. If you think someone might benefit from this piece, please share it on using the buttons at the end.

BC Greens in Canada: Organizational structure

Political technology implementation across a party-wide organization such as the BC Greens in Canada wasn’t difficult in the slightest because these guys know structure. Everything is planned well in advance and this leaves little room for error. If obstacles start to appear, there is a protocol for dealing with it, such is the degree of importance placed on order.

The BC Greens in Canada have just enjoyed their most successful regional election to date, jumping from 8% vote share in 2009 and 2013 to getting 16% in 2017.

Priority number one for this party was protecting voter information. Ecanvasser guarantees this through different permission levels. For example, a canvasser assigned to one area shall only be able to access the information relevant to this area's voters. If you are assigned the permission level of Campaign Owner or Campaign Manager then you will automatically be able to access further information. After the BC Greens had established who would be assigned which setting, further testing was completed to ensure that they were satisfied with the NationBuilder and Ecanvasser relationship. You can check out how Ecanvasser syncs with NationBuilder here.

The thoroughness of the BC Greens when checking to see which political technology suited them was only further highlighted when they went and conducted extensive field tests on the mobile apps well in advance of their official deployment date.

The functionality of Ecanvasser complimented the BC Greens extremely well because they knew their goals in the early stages of their campaign and this is something we always advise to lock down. Plan an effective campaign roll out strategy, check this out for some tips.

The Solidarity Party, formerly the Anti-Austerity Alliance is a broadly left-wing political party in Ireland, launched in 2014.

Messaging is extremely important to this contingent and therefore they spend a large portion of their time and effort into developing a solid grassroots base. The Anti-Austerity Alliance is a movement that comes from struggle, established by activists from the anti-Household Tax campaign.

Once they had established best practice around canvassing operations they turned their attention to managing and understanding the data coming back from field operations.
We helped them to provide training documents and materials to their team so best practice was adhered to. Support was provided through the chat box on the website so they had access to immediate help with any issues. Any support tickets that came through out of hours were dealt with the next day.

We also organized tutorials with their team to ensure they were getting the best from the product. Finally, they used the product to inform their campaign messaging in the critical few weeks prior to election day. They were happy they were able to respond to the feedback from voters and ensure they were correctly representing their views.

The NEOS Party was founded in 2012 and occupies a Centre, pro-European stance. It currently has 9 members (5%) of the National Council and 1 MEP. NEOS became a full member of the Alliance of Liberals and Democrats for Europe (ALDE) on 2 May 2014.

The Ecanvasser app was liked by the NEOS members especially because it saved time and made it possible to detail communications with potential voters. It was mentioned that potential voters appreciated the professional “touch” of using an app and the quick turnaround it offered the party.

The only potential issue faced by the Ecanvasser Support team was in using Google API mapping technology to process German language abbreviations of addresses, for example, Str. for Strasse. With a bit of help from our team, NEOS were able to get everything up and running within a week. They split their 70,000 plus voters into Precincts and, in that way, were able to speed up the process of on-the-ground organizing.

Lake Ray decided early in 2016 that he would run for the 4th Congressional District seat in Florida, setting up a contest against former Sheriff John Rutherford on the 30th of August for the Republican primary nomination.

Ray took his campaign back to basics and focused primarily on canvassing and knocking on as many doors as possible. His completed nearly 72,000 and recorded a stellar 10,000 doorstep interactions with a team of over 30 volunteers. Onboarding and bringing people up to speed with the mobile functionality was a no brainer as political tech has long been on the horizon in the US and people expect to use tablets instead of pen and paper on the campaign trail nowadays. Completing up to 2,000 surveys during the canvassing operation allowed Ray to stay focused on logistics and the issues that mattered to him.

Rutherford and Ray were top of the pile going into the polls come Aug. 30. The former sheriff took the Republican primary with 39% of the vote, while Ray took an impressive 21% for a first-time candidate against a field of six experienced candidates.

Rutherford went on to take the Congress seat confortably against the Democratic nominee in November, facing his greatest battle in Ray in the primaries.

The Alliance Party of Northern Ireland is a liberal and centrist political party and N.Ireland's fifth-largest party overall, with eight seats in the Northern Ireland Assembly. Patrick Brown was elected to Newry, Mourne and Down District Council in 2014 and would have wide experience in carrying out casework for constituents, running campaigns in national elections and on local issues and Chairing committees.

Hoping to rise up the ranks in the N.Ireland Assembly Elections in 2017, Brown contacted Ecanvasser. Many in the Alliance party felt the tide was changing and none were more confident than Brown himself. 2017 was a different playing field, hard work and hours on the campaign trail were sure to pay off in some manner.

His youth brought a new found flair to the campaigning and his focus on social media helped spread the consistent and coherent message coming from the Alliance party.

The Brown campaign aimed to take voters off “auto-pilot” and reactivate the way they approached the polls. Building a campaign team from scratch who backed his message and delivered it to the doorstep showed that local level outreach works and secured them 9.2% of the vote share. A huge jump from the 2,200 1st preferences they secured in 2016.

Brown and his campaign team members used the Ecanvasser app on their mobile phones and tablets while out on the campaign trail. Breaking canvasser teams into small groups of between two and four, the Brown campaign canvassed nearly 6,000 homes in 6 weeks.

With a heavy focus on social media, especially Facebook, when conversing with people at the door, Brown saw lots of people further engage with him either through messaging on social media or joining the campaign team. This leveraging of the face-to-face interaction to be continued on social media was one of the hallmarks of his effort and is something that all campaigns can learn from.

We can now see how poli-tech is being implemented differently by political parties both big and small. It is exciting to think where this will lead us in the future. Let us know your thoughts on how best to run a campaign and we would be happy to blueprint it for everyone else. If you think this piece might be useful for someone you know, please share it on using the social share buttons below.